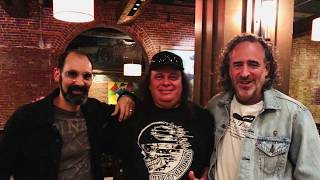 Glen once again was busy at Gibson Custom Shop in Nashville handpicking amazing Gibson Guitars for his customers. It is always an honour to be able to tour the factory and personally pick guitars. This year was no exception. Thom Fowle at Gibson Custom is always an amazing host. The new CEO James Curleigh and CMO Cesar Gueikian have really kicked things up another notch at Gibson. The efficiency, quality, and moral around here is tangible. Great to see this legendary brand ri
0 comments

It is always great when our friend Paul Pigat drops by Westcoast Guitars. This time he is taking a custom built 1930's lap steel for a spin. Paul Pigat the legendary guitarist from Cousin Harley and Boxcar Campfire is one of the most talent guitarist/singers around. Check him out for sure! http://www.paulpigat.com/ #Paul #Pigat #Cousin #Harley #Boxcar #Campfire
0 comments

Westcoast Guitars your vintage guitar headquarters since 1989 is now handpicking select Gibson Custom Shop handmade electric and acoustic guitars. The owner Glen Smith is selecting some of the finest quality and limited edition guitars from the legendary Gibson Custom Shop in Nashville USA. These amazing handcrafted guitars, including the '58 and '59 Reissue Les Pauls are some of the finest instruments Gibson has ever produced. The weights and tops are all within Glen's speci
0 comments

Westcoast Guitars continues to offer only the best guitars in the universe. The Gibson Custom Shop has recreated British rock legend Mick Ralphs’ 1958 Les Paul Standard and, have copied every minute detail of this old burst to make it look like the real thing. This is absolutely one of the best Les Pauls we have seen at Westcoast Guitars. Gibson states ... "The original (serial #8 7049) was studied in London, where its top carve profile, neck contours and pickup outputs were
0 comments

Westcoast Guitars sells only the best guitars and amps in the Universe. This number one rated guitar store always has another unique guitar to bring to the world. Whether it is one of our vintage guitars from the vault, or a hand made limited edition Gibson Custom Shop guitar from Slash, Joe Bonamassa, or Mick Ralphs the excitement continues ! Whether it is an ESP guitars from Kirk Hammett or James Hettfield , a Caparison Guitar or a Tom Anderson custom built guitar, Westcoas
0 comments

The original Les Paul Model featured a gold finish from its introduction in 1952 until it received a new cherry sunburst in 1958 along with a new name, "Les Paul Standard." It debuted at the July 1958 Music Industry Trade Show in Chicago but it didn't catch on until its beautiful appearance and resonant properties inspired the likes of Keith Richards, Jimmy Page, Eric Clapton, Mike Bloomfield, Duane Allman, Peter Green, Joe Walsh, Joe Perry -- and eventually Slash -- to perfo
0 comments

Be sure to check out our amazing Gibson Custom Shop Guitars ! Hand picked by our vintage expert, these top quality, handmade, guitars are the best Gibson guitars available. When you want the best, contact us for expert information and advice before making your purchase. Our years of experience dealing in vintage guitars may prove very valuable to you in making your musical investment. New limited edition 1957 Goldtop Les Pauls are arriving soon. Call to reserve .. 5399.00 Th
0 comments

Westcoast Guitars has been selling high quality vintage guitars for decades in Canada, and we are proud to be handling Gibson Standard Historic, True Historic, and Gibson Custom Shop guitars in Canada. Hand picked quality Replica Level Historic Reissue's with The Hand Crafted Look, Tone and Feel of Vintage Original Gibsons. With the price of 50's and 60's vintage guitars going through the roof these guitars are an amazing value. These guitars feature unprecedented accuracy in
0 comments
bottom of page